Rocky and the Bible

"He brought Simon to Jesus, who looked at him and said, ‘You are Simon son of John. You are to be called Cephas’ (which is translated Peter)." -John 1:42

This is the part in the gospels where Jesus nicknames Peter "Rocky" as I've always been told it would translate. Then I started realizing the hillarity behind this. I wonder if Our Lord would wake Peter up in the morning by singing 'Eye of the Tiger', or at least hum it really loud, and then burst out laughing while all the other apostles just looked at each other and got worried. Or if he would yell "Adrienne!" whenever Peter's wife came around. I think this issue should be a part of the ongoing Predestination-Foreknowledge debate, it's a lighter side.

But then I realized it was just the beginning, suddenly the Catholic-Protestant debate verses had a humorous side to them as well:

Speaking of divisions in the church at Corinth St. Paul writes:

So this could be transliterated into english as "each of you says...'I belong to Apollos', or 'I belong to Rocky'"

Rocky and Apollo(s) - it's as if the Holy Spirit was pre-figuring those terrible boxing movies!

If Papal Supremacy is every restored, I think the Vatican should use this poster to celebrate the end of denominations: 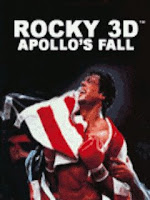