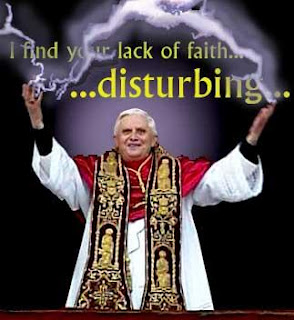 Today I was reading Pope Benedict XVI's theology in a book I bought which holds a collection of his writing. He's a theological genius in my opinion, the smartest man I've ever read, and the most biblical Roman Catholic theologian I've ever read. He is totally a man of resourcement theology (a return to biblical and patristic sources for theology - rather than Neo-Scholasticism). Today as I sat in the Cathedral at Mass I realized, I'm in communion with the Bishop of Rome, the Pope, Papa Benny 16. We're one body, it's as if we were sharing in communion together, along with all the Roman saints in Heaven, St. Thomas More, St. Thomas Aquinas, etc. I have had temptations to Anglo-Catholicism recently again (luckily Anglicanism has continued to kill itself, if there are any anglo-Catholics left), but as I thought about it, I enjoy the unity and doctrinal clarity of "romanism".

My self-hating Evangelical friends talk about East Orthodoxy as if it were the Celestial City, personally I'd become Missouri-Synod Lutheran before crossing the Bosphorus. Aside from the racism of Orthodoxy, there's the whole mess of jurisdiction, and the controversy of the Antiochan Orthodox Church in America right now: http://www.toledoblade.com/apps/pbcs.dll/article?AID=/20090713/NEWS16/907130324

We had priests rape children, but no bishops who got drunk in casinos and grabbed womens...well just read about it. That was a bit of a red-herring and an unfair shot at the Greeks. We`re all sinful. Anyway, I was just reminded of how much I enjoy the unity that comes from the Monarchical Rule of the Papacy, for all the evil it can do when we have a bad pope, it makes times sweet when we have an awesome Pope like Benny (this is true of all Monarchy really).

God be with the Successor of Peter, the Servant of the Servants of God, Papa Benny 16. Augustinian, German, and Cat-lover. Who would`ve thought that a former Nazi and head of the Inquisition (Congregation of Faith) would make such a lovable grandpa figure Pope.

I have grown to hate Roman Triumphalism, and have tried to avoid it in this blog (though failed on MANY occasions), but I found this Chesterton quote expresses my affinity for my Roman Catholicism well:

So far as a man may be proud of a religion rooted in humility, I am very proud of my religion; I am especially proud of those parts of it that are most commonly called superstition. I am proud of being fettered by antiquated dogmas and enslaved by dead creeds (as my journalistic friends repeat with so much pertinacity), for I know very well that it is the heretical creeds that are dead, and that it is only the reasonable dogma that lives long enough to be called antiquated. - G. K. Chesterton