Difficult Gospel: Issues with Catholicism -Today at the church...

I went to confession today and got in line behind my friend (who had just come back to the church). I waited in line for my turn. I stared at the icon of Christ blessing the saints on our hymnal. I waited... I prayed for forgiveness... I read the Nicene creed. Right as all my Protestant emotion built up and I was about to ridicule the institution of confession I got to "we believe in one holy catholic and apostolic church"... *so do Lutherans, Presbyterians and the Orthodox* I thought cynically.

At 4 minutes to Mass, with someone still in confession I realized I wouldn't make it. I quietly told the man behind me that he could take my place, and that 4 minutes wasn't enough time, he smiled and asked me if I would go another time as a concerned Christian brother and I reassured him I would. As I walked out, disenchanted by yet another practical faillure of Roman Catholicism, I looked up at the crucifix. The way it was positioned on the wall made it look like some Cleric had nailed him there. As if Jesus was trying to walk into the church to talk with someone and they nailed him to the wall. In all my doubts I found comfort in the thought that at least he was still there on the wall, looking down at people.

I once read that Tolkien used to stare at the crucifix and see it as a whole philosophy of life. That for Christ to become man it meant that he had to suffer. To be with us, he would endure the cross, there could be no fellowship without pain.

I was reading a comment Jared posted on my blog a year ago about how embracing Protestantism was not rejecting Church History. While I am now a Roman Catholic (mostly for the reason of my disagreement with him there), I actually find I agree with him alot. They are a part of a Catholic and Orthodox tradition. If I had to label it, it would be Christocentrism. Everything must point to Christ. I could endure the Mass, the Latin, Mary, the Saints, the whole sacramental system, and the cumbersome theology of scholasticism all if at least they pointed to Christ. While I can find some Roman Christians like Peter Kreeft, Thomas Howard, and Henri Nouwen who see Christ in it all, I am finding alot of difficulty. It feels more like he's been nailed to the wall in his own Church. An infant trapped in the arms of the Virgin Mary, unable to speak for himself... Trapped in the confessional with a long line of people whom there is not enough time to absolve (I still see the Priest as Christ's representative).

The problem for me isn't that Catholicism has removed Christ from their official doctrine, but rather that they've put him behind bars. They've trapped him in the Eucharist - not that he isn't present there - but what a safe Jesus the Eucharist is, only to be distributed to those the Church deems worthy, only those who've met the 'standard' (mortal sin, 1 hour previous to mass of fasting, confession). It's not the dogma, it's the practice.

There's a great biting critique of Roman Christianity here http://theologytoday.ptsem.edu/oct1960/v17-3-bookreview1.htm, and I'm planning on buying Jaroslav Pelikan's book "The Riddle of Roman Catholicism" to see his arguments against Trent etc. But I'm temporarily comforted by people like Kreeft and Howard, and Pope Benedict XVI, who seems to be a man genuinely in love with Jesus.

I am comforted -as I always have been- as well by Holy Scripture which has always taught me that "all who call on the name of the Lord will be saved" and so I am not too worried about confession. I wrote down a list of my sins to confess, so if I die, I'll have "proof" that I was contrite. I read a passage with my friend Lars the other week:

"you, who were dead in your trespasses and the uncircumcision of your flesh, God made alive together with him, having forgiven us all our trespasses, by canceling the record of debt that stood against us with its legal demands. This he set aside, nailing it to the cross." -Colossians 2:13-14 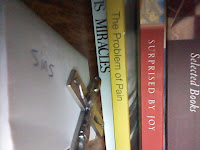 I got back from confession and folded up my paper and wrote "sins" on both sides of it, and placed it under my crucifix.

Still I submit myself to Pope Benedict XVI and the magesterium of the Roman Church, but I will ever detest and attack Christless Christianity wherever I see it, and will try with all my power to restore an emphasis on the grace of Christ, and his lordship. May God help me.
Posted by A at 2:45 PM