The Joys of Catholicism (2) - Marian Devotion 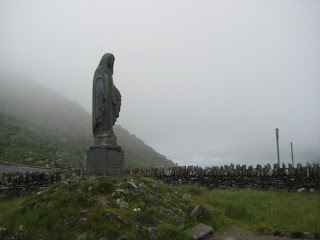 I'm very hesitant to post this, because it's so full of Popery. It's the most Romish I think I've dared to go here, and so I'm warning everyone.

I started this post with the warning because I feel like if I talk about the personal spiritual joys I've experienced as a Catholic, Protestants will dismiss it as meaningless emotion. I know they'll do it, because that's what I would do if I were them. So please don't dismiss it outright. I announce my joys in Catholicism only after and sometimes in the midst of my difficulties with it.

Mary Mother of Christians?
When I "signed on" to Catholicism, one of the remaining "cons" was the Blessed Virgin. I think Baptists are instilled with a special hatred for Our Lady - or at least I was, because the only thing I remember being taught about her in church was that she was a sinner and that she didn't follow Jesus, just like the Roman Catholics who worshipped her. I was given 3 rosaries after my confirmation and despite my remaining struggles with the Virgin Mother, I am starting to lighten up about it. I was reading in Pelikan today about how Christology is linked to Mariology and how Christ who had won superabundant grace on the cross, chose to mediate it through his Mother. This made me almost physically sick. I wanted to scream and burn the book (Yes the Baptist force is still strong with me). I could not imagine how such doctrines of Mary could ever point people to Jesus, to the God who claims his own name as "Jealous". None of it made sense, but again I was reminded, this is the original doctrine which people criticized. This is the liturgical tradition of the church and the sum of her prayers, IT is to be accepted, and the burden of proof rests on those against St. Mary theotokos.

(Mis)Translating with St. Jerome!
I've been finding titles for Mary that I feel comfortable with, St. Mary Theotokos, Our Lady, Mother of the Church, Mother of God, and a new favourite I picked up in Pelikan today he is describing titles for her that had to do with "tricks of language".

"One was the identification of the Virgin as "Mary, star of the sea [Maria maris stella]," a name that was said to have been given her from on high. The name was thought to have been prophesied in the oracle "a star shall come forth out of Jacob" (Num 24:17)...its origins seem to lie in Jerome's etymology for the name "Mary" as "a drop of water from the sea [stilla maris]," which he preferred to other explanations. This etymology was taken over by Isidore of Seville, but in the process "drop [stilla]" had become "star [stella]."" - Jaroslav Pelikan "The Christian Tradition" Vol. 3, p. 162 (Mary as Mediatrix). - yes, another Marian title based on a mistranslation, there are many.

Anyway, I was about to go to bed and then decided I would pray first. So I took a rosary and lay on my back on the balcony of our house, looking at the stars and prayed it. The bright stars mixed with "Star of the Sea" made it an interesting time of prayer. It was very good.

I really thought about "gratia plena" (full of grace - my use of the Ave Maria in latin, might be a subconscious method of pretending I'm not praying to Mary). Anyway the 'gratia plena' reminded me of a verse I liked from bible study the other day: "From his fullness we have all received, grace upon grace." Jn 1:16. I think this verse is one of my new favourites, not only is it a great prooftext for a scholastic/thomistic/catholic understanding of grace (lol), it's also beautiful, about grace, and about Jesus.

My Big Fat Greek Marian Dogmas
As I find out that the Greek Catholics/Orthodox also 'worship' Mary, it helps put me at ease to know that even without the Vulgate include Mariology in the "catholic faith" (including her title as mediatrix).

And so St. Mary, Star/Drop of the Sea, is becoming daily less of an issue, I feel no trouble of conscience in praying the Rosary (just occasional boredom). I also find that much of my "hatred" for Mary comes from the Misogeny I naturally have. I've said before that if there were a rosary to St. Thomas More, I'd have no problem at all, part of it seems to be what I was taught about Mary in sunday school, and part of it is the fact that I've never before had a woman held up as a good Christian. Another problem seems to be my latent racism which makes me cringe at the thought of attributing beauty to a wrinkled old Jewish woman from the 1st century. Give me classical greek sculptures or blonde-haired, blue-eyed Western European statues, but not the real thing. May God change my sinful heart.

St. Alphonsus Liguori I've been told is good to read on Mariology, but his "glories of Mary" still sounds a bit scary to my newly Roman ears. I need to ease into this.
Posted by A at 9:44 PM