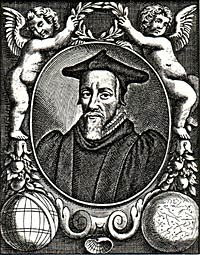 Anglicanism has always held a spot in my heart since the day almost 3 years ago I first did ministry in the Church of England (it was the first Church I went to in England and they had the audacity to name it after a saint! - I asked our driver if it was Catholic lol).

Anyway, tonight I read Richard Hooker's "Learned Discourse on Justification" and it blew my mind.

Maybe it was just your average Reformation thesis, but it was very significant to me. First of all, he's writing in the age of polemics in the 16th century, and even though he calls the "Church of Rome", "Babylon" and "Anti-Christ", he actually was quite ecumenical in arguing that many Roman Catholics could be saved and many could be saved without even hearing about the doctrine of justification by "faythe ownly" (faith only). He shows a perfect understanding of Trent (something I've not seen in another Reformer - though I haven't read many) and shows how they agree with them and that indeed they hold the foundation of all Christian faith, namely that salvation is through the blood of Jesus Christ alone. But he says they add things heretically. He even distinguishes from a more Lutheran reading of Rome as teaching what the Judaizers did (very perceptive), and says that while it is partially right, it is a false gospel and that this and the obligatory belief in transubstantiation are enough to merit separation from Rome.

I'm not saying I'm becoming Anglican (I'd like to hear Richard Hooker's thoughts on Today's Canterbury), but it certainly has given me alot to think about.

Here are some quotes I enjoyed:

"Our very virtues may be snares unto us. The enemy that waiteth for all occasions to work our ruin hath ever found it harder to overthrow a humble sinner than a proud saint. There is no man's case so dangerous as his, whom Satan hath persuaded that his own righteousness shall present him pure and blameless in the sight of God."

"we acknowledge a dutiful necessity of doing well, but the meritorious dignity of well doing we utterly renounce. We see how far we are from the perfect righteousness of the law. The little fruit which we have in holiness, it is, God knoweth, corrupt and unsound: we put no confidence at all in it, we challenge nothing in the world for it, we dare not call God to a reckoning, as if we had him in our debt-books. Our continual suit to him is, and must be, to bear with our infirmities, to pardon our offences."

"the scope of Christian doctrine is the comfort of them whose hearts are overcharged with the burden of sin; and had proved that the doctrine professed in the Church of Rome doth bereave men of comfort, both in their lives and at their deaths; the conclusion in the end whereunto we came was this: "The Church of Rome being in faith so corrupted as she is, and refusing to be reformed as she doth, we are to sever ourselves from her. The example of our fathers may not retain us in communion and fellowship with that church, under hope that we, so continuing, might be saved as well as they. God, I doubt not, was merciful to save thousands of them, though they lived in popish superstitions, inasmuch as they sinned ignorantly; but the truth is now laid open before our eyes." The former part of this last sentence, namely, these words. "I doubt not but God was merciful to save thousands of our fathers living In poplsh superstitions inasmuch as they sinned ignorantly" -- this sentence I beseech you to mark, and to sift it with the strict severity of austere judgment, that if it be found as gold it may stand, suitable to the precious foundation whereupon it was then laid; for I protest that if it be hay or stubble mine own hand shall set fire to it. [Cf 1 Cor 3:11ff] Two questions have risen by occasion of the speech before alleged: the one, whether our fathers, infected with popish errors and superstitions, might be saved; the other, whether their ignorance be a reasonable inducement to make us think that they might. We are therefore to examine first what possibility, and then what probability, there is that God might be merciful unto so many of our fathers."


"heresy is heretically maintained by such as obstinately hold it after wholesome admonition. Of the last sort, as also of the next before, I make no doubt but that their condemnation, without actual repentance, is inevitable."

"What way is there for sinners to escape the judgment of God but only by appealing unto the seat of his saving mercy?"

"if any of them did die so persuaded, whether before or after they were told of their error, their case is dreadful, there is no way with them but one, death and condemnation"

"we are justified by faith alone, and yet hold truly that without good works we are not justified"

"(Describing a Roman Catholic dieing) when the hour of death approacheth, when they secretly hear themselves summoned forthwith to appear and stand at the bar of that Judge whose brightness causeth the eyes of angels themselves to dazzle, all those idle imaginations do then begin to hide their faces. To name merits then is to lay their souls upon the rack; the memory of their own deeds is loathsome unto them; they forsake all things wherein they have put any trust and confidence: no staff to lean upon, no ease, no rest, no comfort then, but only in Christ Jesus."

"I grant that we are apt, prone, and ready to forsake God; but is God as ready to forsake us? Our minds are changeable; is his so likewise? Whom God hath justified hath not Christ assured that it is his Father's will to give them a kingdom?"

"They acknowledged Christ to be their only and their perfect Saviour, but saw not how repugnant their believing the necessity of Mosaical ceremonies was to their faith in Jesus Christ"

"Then what is the fault of the Church of Rome? Not that she requireth works at their hands that will be saved, but that she attributeth unto works a power of satisfying God for sin, and a virtue to merit both grace here and in heaven glory. That this overthroweth the foundation of faith I grant willingly; that it is a direct denial thereof I utterly deny."

"I will not be afraid to say unto a cardinal or to a pope in this plight, "Be of good comfort, we have to do with a merciful God, ready to make the best of that little which we hold well, and not with a captious sophister who gathereth the worst out of everything wherein we err.""

"I saw it convenient to utter that sentence which I did, to the end that all men might thereby understand how untruly we are said to condemn as many as have been before us otherwise persuaded than we ourselves are"

I see in his writing his firm conviction that the gospel is of Christ's merit and not our own, but also that Anglican spirit of forgiveness for others and his constant reaffirming that even if we hold on but by a thread with our faith to Christ, we are still in his mercy. Oh for me to only be born before Priestesses and Female Bishops, to be in the Church of John Donne, T.S. Eliot, and C.S. Lewis
Posted by A at 7:12 PM