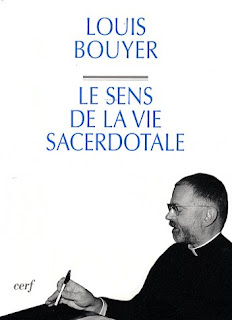 Louis Bouyer was a Lutheran Minister in France, and eventually converted to Catholicism and became a Roman Catholic priest. He was a part of Vatican II (though he ended up being greatly disturbed by how it "ruptured with tradition"). He wrote a book I'm desperate to read, "The Spirit and Forms of Protestantism", I've read some of it on Google books but I'd really like to pick it up. I found a good article summing it's main points up: http://www.catholiceducation.org/articles/apologetics/ap0097.html The quote below is the introduction of the book by Pere Bouyer (Americans, that's French for Father Bouyer):

"This book is a personal witness, a plain account of the way in which a Protestant came to feel himself obliged in conscience to give his adherence to the Catholic Church. No sentiment of revulsion turned him from the religion fostered in him by a Protestant upbringing followed by several years in the ministry. The fact is, he has never rejected it. It was his desire to explore its depths, its full scope, that led him, step by step, to a genuinely spiritual movement stemming from the teachings of the Gospel, and Protestantism as an institution, or rather complexus of institutions, hostile to one another as well as to the Catholic Church. The study of this conflict brought him to detect the fatal error which drove the spiritual movement of Protestantism out of the one Church. He saw the necessity of returning to that Church, not in order to reject any of the positive Christian elements of his religious life, but to enable them, at last, to develop without hindrance.

The writer, who carved out his way step by step, or rather, saw it opening before his eyes, hopes now to help along those who are still where he started. In addition, he would like to show those he has rejoined how a little more understanding of the others, above all a greater fidelity to their own gift, could help their 'separated brethren' to receive it in their turn. In this hope he offers his book to all who wish to be faithful to the truth, first, to the Word of God, but also to the truth of men as they are, not as our prejudices and habits impel us to see them." - Fr. Louis Bouyer "The Spirit and Forms of Protestantism

A-freakin-men Father. I absolutely love this quote, it sums up everything so perfectly. I love the way he says about seeing men as they are and not just going with our prejudices, and I like his reflection that Catholicism in his opinion is merely the fullest expression of all the goodness of Protestantism. (The Protestants I know will completely disagree with this naturally).
Posted by A at 12:42 PM