The Church According to Nicea, why St. Edmund Campion died

On a bit of a mix of personal and theological I thought I'd just write a few things down on the unity, catholicity, and apostolicity of the Church as well as the development of doctrine.

I still remember reading Dominus Iesus or whatever Benny 16 put out as his encyclical that non-Catholic churches were merely "ecclesial communities" and being horrified. At the time I thought "Catholics aren't even Christians and they're telling us we aren't!?" ... I guess I didn't realize that Catholics probably thought they were Christians, but that would've saved me some confusion.

It was that document and the Catholic-Protestant Debate which I visited around that time which led me to what is (in my opinion) one of the most important points in Church History. As I looked for which Church I wanted to join I still had my unbiblical concept of the invisible church but then I read these words in the Nicene Creed, which J.N.D. Kelly, and Philip Schaff said was considered early on to be an infallible pronouncement in the eyes of the primitive Church (the Nicene Creed that is).

"We/I believe in one, holy, catholic, and apostolic church" . The next line about baptism scared me as well. I knew there were only 3 churches applying for that job description and so I began studying Anglicanism, Orthodoxy and Catholicism. While I still like all 3 of those, I've chosen the last because I believe it meets those standards best.

While reading the story of St. Edmund Campion the other day it reminded me of this phrase. I'm still looking for a confirmation saint and while Augustine and Aquinas have been the steady tie, 2 others have come up recently. St Edmund Campion and St. Thomas More. I want one of them because they lived in what I call "the era of complicated Christianity" (or after the Reformation). It was an utter mess, and I want to be able to identify with someone who wasn't just a Western Christian but was specifically faithful to Catholicism and was killed for his strength of conviction.

I'm really thinking it's going to be one of the English martyrs who died for the primacy of the Holy See that ends up being my patron saint. I LOVE what St. Edmund Campion said at his trial where he defended himself vehemently against all the charges of those English martyrs: His beautiful words: 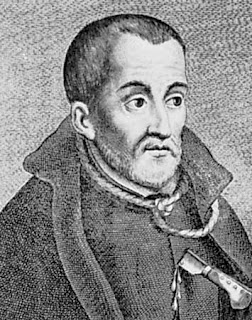 "In condemning us, you condemn all your own ancestors, all our ancient bishops and kings, all that was once the glory of England -- the island of saints, and the most devoted child of the See of Peter" - St. Edmund Campion

That almost gives me goosebumps. He was hanged, drawn, and quartered, which is really horrific, if you don't know what that entails, read about it on wikipedia. I think about St. Edmund and St. Thomas More and how they died for that phrase, that jewel of dogmas of Ancient Christendom "one, holy, catholic, and apostolic church".

St. Edmund Campion pray for us!