First of all I'd like to pronounce a damnable curse on blogger for never spacing my posts correctly and mashing them together or putting 5 lines of space where there should be one....you'll get yours blogger...you'll get yours.

I somehow ended up on this blog today: http://unreasonablefaith.com/2009/02/18/faith-not-as-effective-as-bullet-proof-glass/ 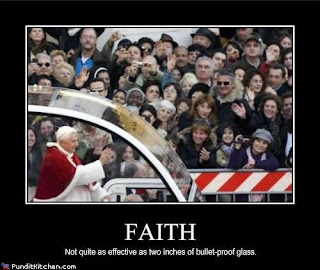 "Well when it comes down to it Christians don’t really believe in miracles anyway. When they hear of a person claiming “God told me to kill my children” they instinctively know that person is crazy. We all do. Doesn’t matter what God told Abraham; when it happens in the real world Christians respond like anyone else. If I claimed to have literally moved a mountain with my faith no Christian would believe me. Christians go to a doctor when they’re sick. They may pray as well, but they’ll definitely go to a doctor, and they’ll look at you like you’re crazy if you don’t.
Christians will wear seat belts and follow safety instructions and buy insurance and save for retirement just like anyone else. They may claim that they believe God heals and God protects and God provides, but it doesn’t tend to turn into action. So the fact that they’re protecting the pope is no surprise. They have no illusions of God providing protection, so they’ll do it themselves." - Jeremy (some random guy on this website)
I was thinking about this the other day while I was in mass looking at the Blessed Sacrament thinking "I officially believe that what he's (Fr. Peter) holding is God...that's strange". Obviously now is where the Protestants will jump in saying "God wants to kill the Pope and it's just bread!!!!' but if we could avoid that argument I'd like to discuss a bigger issue.
Are we (Christians) still Supernaturalists? Do we still believe that God intervenes in the natural world to enforce his will?
After all, if Presbyterians really believed that God predestined them and will never forsake them, then why buy insurance as the guy above said.

The easiest solution seems to be the Catholic/Arminian view of "God gave us free will and now is kind of watching the game from the sidelines...except when good things happen, those were definately him".
What is the Rationalist to do?
Spinoza would argue that God is intrinsically tied to creation (he was a pantheist) and thus miracles are unnecessary because he invented the world and everything that would happen, so his will is acheived through those worlds laws (natural) and everything that happens is thus his will. Or in the words of Alexander Pope, "All that is, is right". This kind of makes sense, until you realize how horrifying the world is. In the end you'd follow this logic and become some sort of Liberal Anglican Deist who's telling kids the red sea is only a foot deep...(I can see myself there in nightmares....).
As St. Paul says 'the righteous shall live by faith', so maybe we shouldn't get insurance, dismantle the Pope's bubble car (hello monthly papal conclaves), not worry about tomorrow as Jesus says, and sell everything and give it to the poor... .what a horrifying image - it's almost like what the early Christians did (see St. Anthony of the Desert, St. Justin Martyr, and others).
...better just return to our grotesque marriage of secular materialism and baptized capitalism. hurray for doublethink.
Posted by A at 10:34 AM