"O Lord, do not rebuke me in your anger,
or discipline me in your wrath.
Be gracious to me, O Lord, for I am languishing;
O Lord, heal me, for my bones are shaking with terror.
My soul also is struck with terror,
while you, O Lord—how long?

Turn, O Lord, save my life;
deliver me for the sake of your steadfast love.
For in death there is no remembrance of you;

in Sheol who can give you praise?


I am weary with my moaning;
every night I flood my bed with tears;
I drench my couch with my weeping.
My eyes waste away because of grief;
they grow weak because of all my foes.

Depart from me, all you workers of evil,
for the Lord has heard the sound of my weeping.
The Lord has heard my supplication;
the Lord accepts my prayer.
All my enemies shall be ashamed and struck with terror;
they shall turn back, and in a moment be put to shame."

3 things I've underlined about the Psalm which I think are noteworthy.

The comment about Death/Sheol being the end is typical of Old Testament thought, I was always taught that the Israelites believed in an immortal soul and Heaven and Hell, it wasn't until I started reading Plato and Aristotle and took a look at the promises in the Mosaic Law (all temporal) and read some N.T. Wright on the issue that things cleared up. At this point in revelation God hasn't revealed to the Israelites Plato and Aristotle's great arguments for the soul and it's immortality. I think it's cool that some early Christians though the 'pagan philosophers' who taught those things were 'prophets of Christ' : 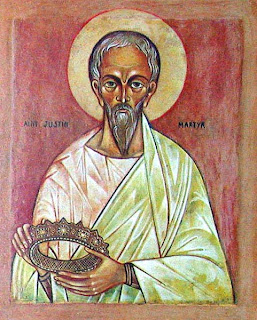 "And so, too, Plato, when he says, The blame is his who chooses, and God is blameless, took this from the prophet Moses and uttered it. For Moses is more
ancient than all the Greek writers. And whatever both philosophers and poets
have said concerning the immortality of the soul, or punishments after death, or
contemplation of things heavenly, or doctrines of the like kind, they have received such suggestions from the prophets as have enabled them to understand and interpret these things. And hence there seem to be seeds of truth among all men" - Justin Martyr (First Apology, 44).


Crazy ol' Justin actually thought of Greek Philosophers as having read Moses and that they were prophets as well. Maybe I'm becoming too much of a Thomist but I think Aristotle and Plato could've been Prophets. (sorry Nominalist Protestants lol).

Anyway, this Psalm is interesting because David/the Author is just hoping to escape death.

I also like this Psalm because it is based on faith. When he says/sings that God has heard his prayer, that's more of a hope, and it says that God shall deliver him from his enemies and kill his enemies. That's future tense. Meaning that this was his hope.


I was reading the account of Benedict Biscop an early medieval abbot for history class the other day and it mentioned how the Psalms were constantly sung by the monks and that sometimes they would sing through all 150 psalms twice a day. I was amazed by that and I think in my mind of the Latin chanting and the Viking raids that were occuring and how they were probably praying for God to deliver them from their enemies as well. Just another great example of how many people have made the Psalms their prayer.

Personally the words that hit me the most are "I am weary with my moaning" - it's the image of someone crying and praying and sobbing so much that they're actually tired from it. It's amazing how weak the Psalm appears, a miserable man begging for help and yet I think of David as this great King going through all of this in a cave somewhere running for his life. In his own words "oh how the mighty have fallen". Grace is above no one.
Posted by A at 8:55 AM