Feast of the Annunciation

Today is the Feast of the Annunciation, when the St. Mary the mother of God became the theotokos/Mother of God because St. Gabriel the Archangel (don't ask me how angels are saints they just are) told her that she would be 'with child' or whatever the Hebrew equivalent would be, and she started singing what would eventually become the Beattles song "Let it Be".

But most importantly as in the case of any liturgical celebration it has become a time for the Roman Catholics and Greek Orthodox and others to come together and to bicker about who has the "Real" Church of the Annunciation on the actual location. I wonder if they'll be another fight like the epic Church of the Holy Sepulcher's 'battle on the burial ground' slugfest of '08 (http://seattletimes.nwsource.com/html/nationworld/2004362684_christians21.html) 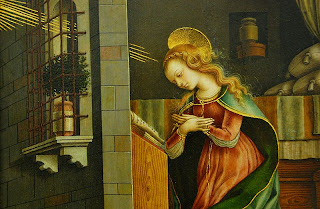 Anyway, getting back to the original annunciation we have this photo either taken by Nazarene Paparrazzi at the time or drawn by some Italian artist who is actually depicting goddess worship in hopes that Dan Brown might one day write a book about it. To clear things up, contrary to what the picture portrays, there is no conclusive proof that Our Lady had down syndrome but that the creator of it merely took artistic license and went with it to add some drama.
But cynicism and joking and blasphemy I'll have to be absolved for aside, here's the story according to the not-eyewitness St. Luke the evangelist:
"In the sixth month the angel Gabriel was sent by God to a town in Galilee called Nazareth, to a virgin engaged to a man whose name was Joseph, of the house of David. The virgin’s name was Mary. And he came to her and said, ‘Greetings, favoured one! The Lord is with you.’ But she was much perplexed by his words and pondered what sort of greeting this might be. The angel said to her, ‘Do not be afraid, Mary, for you have found favour with God. And now, you will conceive in your womb and bear a son, and you will name him Jesus. He will be great, and will be called the Son of the Most High, and the Lord God will give to him the throne of his ancestor David. He will reign over the house of Jacob for ever, and of his kingdom there will be no end.’ Mary said to the angel, ‘How can this be, since I am a virgin?’ The angel said to her, ‘The Holy Spirit will come upon you, and the power of the Most High will overshadow you; therefore the child to be born will be holy; he will be called Son of God. And now, your relative Elizabeth in her old age has also conceived a son; and this is the sixth month for her who was said to be barren. For nothing will be impossible with God.’ Then Mary said, ‘Here am I, the servant of the Lord; let it be with me according to your word.’ Then the angel departed from her. " - Luke 1:26-38
Blessed Virgin Mary, pray for me that God might forgive me for blasphemy, it was for humor's sake, and I'm willing to do some more purgatory for it if necessary. Amen
Posted by A at 10:36 AM