Today was the rite of election for Catechumens and Candidates at our Roman Catholic Cathedral. Our bishop presided and preached an amazing and passionate sermon which spoke to me powerfully. The text was St. Mark's account of the desert temptation and his sermon was all about temptation and conversion. To explain why this was anything more than your average sermon let me QUICKLY explain recent happenings in my life.
I had a Christian friend almost died and still in hospital, I got bluntly rejected by a girl I (sort of) asked out, I found out I have a dentist appointment this monday (one of my biggest fears), I had a terrible night at work, my computer got a virus and is completely destroyed meaning that I've lost all my lecture notes and school work for this year. The computer part was probably the worst as it happened while I was trying to look up the lyrics for "Abide with me" which was going to be my worship song to God in spite of my terrible week. ....and then my comp broke...and I pretty much decided to follow Job's Wife's advice: "Curse God and die". So God and I have been on rough ground recently.
SO, at mass today our Bishop was discussing how Christ is the essence of the Kingdom of God and that unless Christ is sovereign in our hearts/souls then we are denying God's sovereignty in our lives, and excluding ourselves from the Kingdom of God. He tied this to the Rite of Election which he defined as 'the process where God in sovereign freedom chose you to join the body of Christ and to turn your life to him'. Which wasn't Calvin or Augustine, but was still good. So he tied this idea of sovereignty in the Kingdom of God to sovereignty in our own lives. He also said that Satan is never so obvious as to tempt us to openly disown God and side with him (satan). But rather he said Satan tempts us with good things which we overglorify and these become the temples or idols in our hearts. He says this leads us to spiritually write a declaration of independence from God (sorry to the Americans). And so the purpose of Lent is to deprive ourselves of inherently good things to remind us that we need to destroy these temples in our own hearts and lives. As the Lord led Jesus into temptation, so he will lead us, and this is done to remind us who is sovereign in our lives. Is Christ's flag flying in our lives, or have we set up our own rule, our own independence.
I'm reading a book by Brother Andrew called "The Calling" with all these wild evangelistic stories. One of them recounts how difficult it was to get the gospel into China, and how the borders are closed, and the only book permitted is 'Mao's little red book of sayings'. He talks about how they smuggled in bibles disguised as these books, etc, and began by evangelizing the borders and gradually made their way in.
I thought about my own life this afternoon, have I declared a revolution in my heart, have I closed off the gospel and built idols to lust and gluttony and self-centredness. Is my heart more populated with 'Andrew's red book of rationalizations' or sayings that excuse me of my own sin and responsibility, than with God's Word. Is the Lord trying to penetrate the borders of my soul.
Well, today I learned a little more about true repentance, and tried to remember whose side I am on and re-declare my allegiance to Christ. Today's readings also talked about authorities and rulers in the heavenly realms, and so in the language of spiritual warfare, I realized today that maybe Lent will be a beneficial time for God's hostile takeover of my soul, for my unconditional surrender, and for the flag of the gospel to fly high once more. All of this state/warfare/kingdom language and metaphors remind me of something the Ven. John Henry Cardinal Newman said in a sermon on the prodigal son: 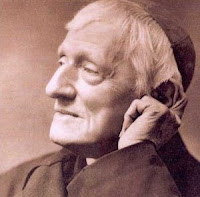 "The most noble repentance (if a fallen being can be noble in his fall), the most decorous conduct in a conscious sinner, is an unconditional surrender of himself to God—not a bargaining about terms, not a scheming (so to call it) to be received back again, but an instant surrender of himself in the first instance. Without knowing what will become of him, whether God will spare or not, merely with so much hope in his heart as not utterly to despair of pardon, still not looking merely to pardon as an end, but rather looking to the claims of the Benefactor whom he has offended, and smitten with shame, and the sense of his ingratitude, he must surrender himself to his lawful Sovereign. He is a runaway offender; he must come back, as a very first step, before anything can be determined about him, bad or good; he is a rebel, and must lay down his arms. Self-devised offerings might do in a less serious matter; as an atonement for sin, they imply a defective view of {97} the evil and extent of sin in his own case. Such is that perfect way which nature shrinks from, but which our Lord enjoins in the parable—a surrender. The prodigal son waited not for his father to show signs of placability. He did not merely approach a space, and then stand as a coward, curiously inquiring, and dreading how his father felt towards him. He made up his mind at once to degradation at the best, perhaps to rejection. He arose and went straight on towards his father, with a collected mind; and though his relenting father saw him from a distance, and went out to meet him, still his purpose was that of an instant frank submission. Such must be Christian repentance: First we must put aside the idea of finding a remedy for our sin; then, though we feel the guilt of it, yet we must set out firmly towards God, not knowing for certain that we shall be forgiven. He, indeed, meets us on our way with the tokens of His favour, and so He bears up human faith, which else would sink under the apprehension of meeting the Most High God; still, for our repentance to be Christian, there must be in it that generous temper of self-surrender, the acknowledgment that we are unworthy to be called any more His sons, the abstinence from all ambitious hopes of sitting on His right hand or His left, and the willingness to bear the heavy yoke of bond-servants, if He should put it upon us." -John Henry Cardinal Newman (http://www.newmanreader.org/works/parochial/volume3/sermon7.html)
May God show you this Lent, the heart of true Christian repentance.
Posted by A at 2:23 PM