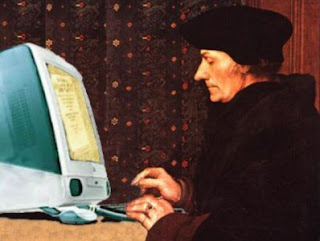 "We are dealing with this: would a stable mind depart from the opinion handed down by so many famous men famous for holiness and miracles, depart from the decision of the church, and commit our souls to the faith of someone like you who has sprung up just now with a few followers, although the leading men of your flock do not agree either with you or among themselves -- indeed though you do not even agree with yourself, since in this same Assertion you say one thing in the beginning and something else later on, recanting what you said before...it is not credible that God for so many centuries should have overlooked such a harmful error in his church without revealing to some of his saints the point which you contend is the keystone of the teachings in the gospel ...How, then, are you sure that Wyclif was a holy man and the Arians were heretics? Is Wyclif holy precisely because he was condemned by the church which you call papistical? By the same token you will say that Arius was holy because he was condemned by the same church. At this point if you appeal to Scripture, did the Arians have any lack of Scripture? No, they did not, you will say, but they interpreted it wrongly. But how can we be sure of that except that the church rejected their interpretation and approved that of the other side? The same could be said of Pelagius . . . I think it is safer to follow public authority rather than the opinion of someone or other who scorns everyone and boasts of his own conscience and spirit." - Erasmus of Rotterdam responding to Martin Luther.

I think my favourite Roman Catholics are those like Erasmus and St. Thomas More who constantly attack the Church and try to reform it, but from the inside. The true reformers rather than rebels who wish to change it not out of spite, but out of love for what it could be. That's why I call myself a Roman Catholic and in the next breath decry the vanity of the Vatican, or the unnecessary Platonism of asceticism, etc.

I call the Counter-Reformers and Church Fathers the 'polemicals' of the faith, and I apologize for putting this up, I just thought it was funny how none of our arguments (Protestant or Catholic) has advanced beyond Luther and Erasmus. I'm hoping to read some Karl Rahner, Ratzinger/Benedict XVI, and Hans Urs Von Balthusar, who are much more modern and ecumenical. But I can't find any of their books anywhere, so I'm just going to read Donald Miller and feel less angry. I only posted the Erasmus cuz I found it on Dave Armstrong's blog.