Thoughts on Lent: My Ash Wednesday

This is just an excerpt from my journal about Ash Wednesday written at about 1pm yesterday and a picture of me in the Brock library with my faint ashes: 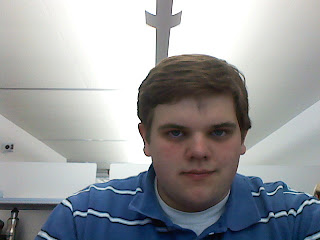 So I just got ashes on my forehead for Ash Wednessday. [a mennonite friend] went with me and I think it was very strange indeed for him, to see me cross myself, etc. A deacon presided, I think he was Roman Catholic, and the Reformed/Anglican (he represents both I think) Chaplain also did readings and prayers. It was ecumenical. I felt strange knowing that there were actually these ‘hidden’ Christians (Anglicans and Catholics in this case) who were devout enough to want to identify themselves publicly. It feels like the University hammer of Atheistic Positivism/Secular Liberalism is somehow striking lighter now. I always felt like it was almost perfect in it’s job at crushing our souls, but today I saw the proverbial ‘remnant’. They weren’t ‘cool evangelicals’ with music that sounds normal, it wasn’t a ‘youth meeting’ where pizza was served. It was an amalgamation of those who recognized the tradition of the church and scripture, and followed it penitentially. Our whispered singing and faltering voices, the general nervousness around the place, as we sung “Amazing Grace” was terribly authentic in the tiny room with students passing by the open door.

It was like the early Christians, huddled together in a room. Afraid of everyone else ‘finding them out’. I think this will be one of the best experiences this year for my faith. It was a blessed time. [my friend] noticed that his pale complexion and the firmness of the deacon made his ashes much more visible – indeed they were – but maybe the worst for me was before I even saw my own, before, when I was so worried what people would say or think, believing them (my ashes) to be visible from miles away ... and then I looked in the reflection of the computer and saw that they were much fainter than I thought, and I could easily move my bangs to cover this marking. It made me realize that perhaps on days like today when all is brought out to the light, that maybe I am in need of an increase of faith and fervor. It’s a preview to judgment day in essence. I used to be very zealous, but time in the world weakens you. In subtle ways at first. But before long you are back into it with everyone else, and you are no longer what scripture calls ‘one of the peculiar people’. Maybe that’s why public penance in the Early Church was good, maybe that’s why the Jews did it. Maybe my entire life it wasn’t the “religion” and “dead ritual” of it all that troubled me. Maybe I was using that as an excuse just to not look funny, to not be peculiar, and to fit in like everyone else."

Thats where my journal left off, but I remember talking with my friend about why on earth he would want to get ashes if he wasn't even Roman Catholic or Anglican and he said it was to try out 'new' religious experiences. But we also discussed how it forces you to be public with your faith. I laughed about how embarrassed I was about it, even though I could argue for Christianity/against atheism in seminars all year long, suddenly this became much more problematic, and how the early christians would've probably excommunicated people like me. So even though I've missed the point of Lent in this post (repentance, prayer, fasting, almsgiving) at the same time I learned a good lesson. Echoed by Saint Paul:

“For I am not ashamed of the gospel of Christ: for it is the power of God unto salvation" - Romans 1:16

I also have to say as a funny story that a guy I met from Campus Crusade for Christ (or whatever new nice name it has) came up to me and saw me reading the bible and then looked at my forehead and was utterly confused. He just looked at me like I had stabbed him in the back and said "I thought you were a Christian?" and I said "I am a Christian, I have been my whole life, but I'm not an evangelical, I go to the Catholic Church". He then proceeded to look at me like a Magic Eye Picture, really confused and a bit troubled. Then he picked up his books and left. lol nothing more scary to an Evangelical Protestant than Traditional Christianity I guess.