Observations In The Church of Rome (Pt. 2) - "Primitive Christianity"

I experienced a rare blessing last week as I sat down with my Evangelical friends and we discussed theology, I realized that after reading parts of Isaiah, Galatians, and 1 John that whenever we talked about what the Scriptures were saying to us, or what they meant originally, we were in agreement. It may have been because they took a Wesleyan approach to their Protestantism - I've always called Wesley the 'half-Catholic' - but I think the heart of it is that when it comes to the main points of theology (outside Justification), we tend to agree. I read this letter of John Wesley's called "Letter to a Roman Catholic"
(it's in this list of letters http://wesley.nnu.edu/john_wesley/letters/1749b.htm) and it reinforced this point. One of the best churches I've ever been in has been Mount Zion Independent Methodist Church in Cliviger, England (where I gave my first sermon, and where John Wesley preached once). I've always loved the practicality of Methodism and how appealing it was to the common man. Wesley talks in this letter about "primitive Christianity" which we can all agree upon and which if we follow, we can both be sure of our future destination. 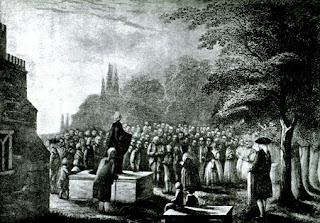 Wesley's ecumenism is absolutely unique in this era of downright hatred between Protestants and Catholics, but this letter has alot of sentences I love which are all about their common ground in the faith. Here are a few:

"You have heard ten thousand stories of us who are commonly called Protestants, of which, if you believe only one in a thousand, you must think very hardly of us. But this is quite contrary to our Lords rule, 'Judge not, that ye be not judged'; and has many ill consequences, particularly this -- it inclines us to think as hardly of you. Hence we are on both sides less willing to help one another, and more ready to hurt each other. Hence brotherly love is utterly destroyed; and each side, looking on the other as monsters, gives way to anger, hatred, malice, to every unkind affection, which have frequently broke out in such inhuman barbarities as are scarce named among the heathens....

I do not suppose all the bitterness is on your side. I know there is too much on our side also -- so much, that I fear many Protestants (so called) will be angry at me too for writing to you in this manner, and will say, ' It is showing you too much favor; you deserve no such treatment at our hands....

But I think you do. I think you deserve the tenderest regard I can show, were it only because the same God hath raised you and me from the dust of the earth, and has made us both capable of loving and enjoying Him to eternity; were ~ only because the Son of God has bought you and me with His own blood. How much more, if you are a person fearing God (as without question many of you are) and studying to have a conscience void of offence towards God and towards man!...

(Wesley goes through the Apostles' Creed emphasizing the continuity of doctrine) ...the third day He rose again from the dead; that He ascended into heaven; where He remains in the midst of the throne of God, in the highest power and glory, as Mediator till the end of the world, as God to all eternity; that in the end He will come down from heaven to judge every man according to his works, both those who shall be then alive and all who have died before that day. 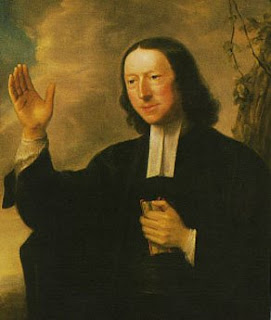 I believe the infinite and eternal Spirit of God, equal with the Father and the Son, to be not only perfectly holy in Himself, but the immediate cause of all holiness in us; enlightening our understandings, rectifying our wills and affections, renewing our natures, uniting our persons to Christ, assuring us of the adoption of sons, leading us in our actions, purifying and sanctifying our souls and bodies, to a full and eternal enjoyment of God.

I believe that Christ by His Apostles gathered unto Himself a Church, to which He has continually added such as shall be saved; that this catholic (that is, universal) Church, extending to all nations and all ages, is holy in all its members, who have fellowship with God the Father, Son, and Holy Ghost; that they have fellowship with the holy angels, who constantly minister to these heirs of salvation; and with all the living members of Christ on earth, as well as all who are departed in His faith and fear....

Now, is there anything wrong in this? Is there any one point which you do not believe as well as we?

But you think we ought to believe more. We will not now enter into the dispute. Only let me ask, If a man sincerely believes thus much, and practices accordingly, can any one possibly persuade you to think that such a man shall perish everlastingly?

...this alone is the old religion. This is true, primitive Christianity. Oh, when shall it spread over all the earth? when shall it be found both in us and you? Without waiting for others, let each of us by the grace of God amend one.

Are we not thus far agreed? Let us thank God for this, and receive it as a fresh token of His love. But if God still loveth us, we ought also to love one another. We ought, without this endless jangling about opinions, to provoke one another to love and to good works. Let the points wherein we differ stand aside: here are enough wherein we agree enough to be the ground of every Christian temper and of every Christian action.

O brethren, let us not still fall out by the way! I hope to see you in heaven. And if I practice the religion above described, you dare not say I shall go to hell. You cannot think so. None can persuade you to it. Your own conscience tells you the contrary. Then, if we cannot as yet think alike in all things, at least we may love alike. Herein we cannot possibly do amiss. For of one point none can doubt a moment, -- ‘God is love; and he that dwelleth in love dwelleth in God, and God in him.’

In the name, then, and in the strength of God, let us resolve first, not to hurt one another; to do nothing unkind or unfriendly to each other, nothing which we would not have done to ourselves. Rather let us endeavor after every instance of a. kind, friendly, and Christian behavior towards each other.

Let us resolve secondly, God being our helper, to speak nothing harsh or unkind of each other...Let us, thirdly, resolve to harbor no unkind thought, no unfriendly temper, towards each other....Let us, fourthly, endeavor to help each other on in what­ever we are agreed leads to the kingdom.

...O let you and I (whatever others do) press on to the prize of our high calling! that, being justified by faith, we may have peace with God through our Lord Jesus Christ; that we may rejoice in God through Jesus Christ, by whom we have received the atonement; that the love of God may be shed abroad in our hearts by the Holy Ghost which is given unto us. Let us count all things but loss for the excellency of the knowledge of Jesus Christ our Lord; being ready for Him to suffer the loss of all things, and counting them but dung that we may win Christ.

May we all recognize what brother John has pointed out here, what unites us is bigger than what divides us, and as the great Charles Spurgeon said, 'may our hearts be smarter than our heads'
Posted by A at 9:07 PM