Observations In The Church of Rome (Pt. 1) - The Gospel

This last week I was very frustrated as I tried to explain to my Evangelical friend why I was still becoming Roman Catholic. She asked me if the Church was energized about evangelism. No, was my honest answer. Do they understand they're saved by Grace? No, for the most part. Do they preach Christ above all else? Not at my current Church (The city Cathedral) but in my parish Church, more often than not. All this to say she was quite confused as to why anyone would remain in such a place. I also told her that I couldn't use any of my spiritual gifts of teaching and preaching there, and that because of these classes I'd been unable to receice the Eucharist for almsot a year now. I tried telling her about the indivisibility of the Church, I tried to explain Transubstantiation and Eucharistic Adoration, I tried to explain the infallibility of the Church/Pope. It wasn't as substantial. For the Protestant mind - especially the Evangelical mind, it's a living faith that matters, it's evangelism even if there's no depth in what is evangelized, as long as people are reached for Jesus. So I decided to put my observations of the Roman Catholic Church up here, more for myself probably than anyone (I think only 2 people read this blog anyway these days).

The Gospel
"You are all sons of God through faith in Christ Jesus" - Galatians 3:26 NIV

Throughout my life as an Evangelical Protestant the most important thing in the world was spreading the Gospel. The Gospel was humanity's only hope, and salvation came by hearing the Gospel preached and the word proclaimed, as St. Paul said "faith cometh by hearing" (Rom 10:17). So when I went to the Catholic Church I wondered what the gospel would be like. To my surprise it was actually there in part being preached. "Swimming in God's Abundant Grace" was a homily given by Fr. Peter at my parish and it was a lovely Lutheran understanding of justification (Trent would've anathemized it). It was good to see some of the message there. When I read my Catechism I found it much more clearly with sections like:

"Justification has been merited for us by the Passion of Christ who offered himself on the cross as a living victim, holy and pleasing to God, and whose blood has become the instrument of atonement for the sins of all men. Justification is conferred in Baptism, the sacrament of faith. It conforms us to the righteousness of God, who makes us inwardly just by the power of his mercy. Its purpose is the glory of God and of Christ, and the gift of eternal life" - CCC 1992

Well the first verse I quoted was Galatians 3:26, a verse I'd heard alot: "You are all sons of God through faith in Christ Jesus", but then I realized I had never read the next sentence with much thought. "for all of you who were baptized into Christ have clothed yourselves with Christ." (Gal 3:27) ... Uh Oh , Regenerative (Saving) Baptism, not good, Lutheran and Catholic alert! I always got angry with the Catholic Church because of their emphasis on the 'dead works of the law' like Baptism, but then I realized that the gospel is twofold, it comes by faith certainly but grace is also conferred sacramentally.

One East Orthodox blogger I read said "Protestantism makes salvation a mental exercise, the sacraments make salvation possible for all, even the mentally handicapped, and go beyond the sort of gnostic salvation whereby knowledge merits grace"... or something to that effect.

So the reason I will sometimes tell people the Church of Rome needs to get real and start preaching about Justification, I keep forgetting that in their theology all of it is linked together, and that whenever a priest reminds us of our baptism, or exhorts us to partake of the sacraments he is simply echoing the other side of grace.

The 2-Lane Road to Redemption
If Salvation is a two way highway I would say that the lane on the right is Salvation by Grace alone, through faith, producing good works, it would have signs saying things like "Believeth on the Lord Jesus" and "Trust in God, trust also in me" (Jn 14.1). But I would say the left lane could be the Sacraments, it would have signs like "baptism that now saves you" (1 Pet 3:21) and "If anyone eats of this bread, he will live forever. This bread is my flesh, which I will give for the life of the world." (Jn 6:51 - Eucharist). 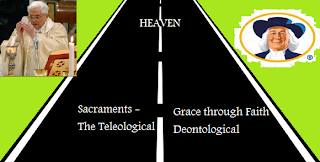 So yes, there are many 'lost' Catholics who without understanding take the good gift each week without a full understanding of Grace and Justification, but maybe in some way God glances on it as the Quakers profess their faith in God and refuse to baptize or break bread together. Maybe God is leading people through the Word and the Sacraments - as the Reformers taught.

In all my frustration with the Church of Rome I perpetually repeat my Augustinian Mantra, "The Church is a whore, but she's my mother"
Posted by A at 7:59 PM