Why Protestantism? (or rather, why the Lutheran Church-Canada)

Devin Rose - a friend who has helped me in so many ways over the years, asked me a fair question.

If Roman Catholicism is not the true religion, how do you know your 'brand' of Protestantism is correct?

What if Aristotle was wrong (as the Church Fathers thought he was)?

How would you disprove Roman Catholicism in a way that was satisfactory to them? Admittedly, you'd have to use Aristotelian logic.

For instance, Kant and (Lord) Russell, both ripped apart the 5 'proofs' for God's existence using empirical epistemology / analytic philosophy. What is RC's reply? Wrong logic. You started with the wrong rules. I might ask, who says we have to start with your rules?

So what I did, and what the Church Fathers did, was use the logic of a system against itself. With my concupiscence/consubstantiation argument, I used Thomism to show the why Trent was wrong.

Were I to then come up with a system based on the same epistemology, I'd have contradicted myself! Because the Roman Catholic claim is circular reasoning: logic is what we say it is, and this is logically demonstrable.

Protestantism says something quite different in it's epistemology.

Protestantism begins with God. God (as St. Anselm and Descartes understood him) was: that Being, a greater than which, cannot be conceived.

So we are presented with the Revelation of God's Word to Moses, through Jesus. How do we decide if this Word is true or not? If we require a rational argument to demonstrate it's truth (which Aristotelianism would have us do), then we aren't actually saying there is truth inherent in the Word. It's just a really good human philosophy, using allegedly divine sources.

By contrast God's Word is a pre-rational revelation that is necessarily self-referential, and circular. God says it, and it's authoritative because God says it. It can only be accepted or rejected. In any case, there's no way to falsify the claims of God about Himself, we can't know. We either trust, or reason.

Again, retaining their rationalism, Roman Catholicism asserts that there are 22 000 Christian 'churches' all claiming to have 'the true religion', let alone Islam and Hinduism. Without reason, how can we judge which claims are best.

First of all, when we're judging claims outside of Christianity, we can certainly use philosophy and reason to undermine these things. (That's why Tertullian used Stoic philosophy to undermine the Stoics, but didn't adopt it in his theology.)

Secondly, there are hardly 22 or 25 k denominations. Likewise, Protestantism follows none of the rules Roman Catholicism does, regarding a communion. For RCs, a church is a communion. For Protestants a church is a confession. There are only really two confessions or Traditions in what I would identify historically as 'catholic Protestantism'. These are Reformed Theology and Lutheran Theology.

Also, it's important to note that both of these confessions acknowledge that the other teaches the saving gospel of justification by faith alone, which in the end is -at least existentially/salvifically- all that matters. So it's not even a necessary issue of 'which is right' (without being too latitudinarian), as any Christian who trusts in God's grace will be saved.

Furthermore as we've seen via Protestant epistemology, the only way to 'internally undermine' things (as I did for Roman Catholicism), as by making Scriptural arguments against them.

In the same way that Roman Catholics are fine having the Pope alone know the true interpretation of Scripture, they seem quite upset that Protestant confessions ultimately confess that their church has the most correct doctrine.

It must also be remembered the numbers have nothing to do with who has 'the true church', as at many times (Noah, Judah, St. Paul, St. Athanasius) the true church was a minority faction.

3. Inherently Humanist Implications in the Question

Next the RC apologist would revert to their argument that God didn't reveal himself properly in his Word, as it's easy if not obligatory to misunderstand it without the Pope (Magisterium and Church can easily be conflated to the Petrine office).

In the same way we saw Papal Infallibility as a de facto denial of the Inspiration of Scripture, we see here the de facto denial of the doctrine of the Holy Spirit in two ways. First, it denies that the individual can actually be inspired by the Holy Spirit to be led into the truth. Secondly it denies that there is truly any difference which the Holy Spirit makes when reading the bible. (This is the rationalistic and pelagian understanding, coupled with an intellectually centred faith, that rejects grace alone or even de facto grace in the believer operating at all)

The individual Christian reading God's revelation with the illumination of the Holy Spirit and the rest of scripture to compare a passage to? Rubbish they say.

Conclusion:
How do I know that the Lutheran Church-Canada is either: the, or a, true church? First of all, it doesn't matter, because ecclesiastical membership is not a salvific issue. Salvation is the work of the regenerating Spirit of Christ, not church bodies. Secondly, when I accept God's Revelation as true (because he could swear by no one greater than himself Hb. 6:13), and am illuminated by the Holy Spirit, I conclude that the gospel of the Augsburg Confession, was the gospel of Christ. 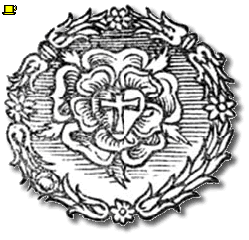 In short, to require any extra-revelatory verification of either God's existence or the validity of his Revelation would be blasphemy.

*note* This is the primary reasoning and epistemological defense of Protestantism/Confessional Lutheranism. There are other arguments in its defense, such as an argument from Patristics or Church History, but these are not what establishes the fundamental truth. They are secondary arguments in both the general apologetic discourse, and importance generally.
Posted by A at 10:49 AM