How The Roman Church Masters the Scriptures 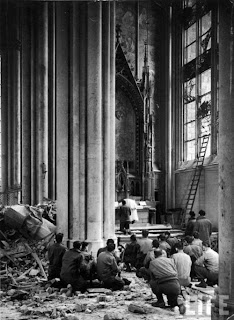 As a previous commenter jcrng (I think I know who this is, my old Deli co-worker) made the point, any Catholic (*read Roman Catholic) would agree that Scripture is inspired and authoritative in and of itself without the Church's approval.

Here's how that breaks down in practice if not in theory.

Let's look at St. Paul's famous exposition of the struggle of the Christian life in Romans 7:20 "Now if I do what I do not want, it is no longer I that do it, but sin that dwells within me."

How should this be interpretted?

Well in Tradition, both St. Jerome (letter 2) and St. Augustine (Nature and Grace) agree in many places that the will of the baptized Christian is not free to do good. It is free to sin or not to sin, but any good work is directly attributable to the Holy Spirit. This is because, as any plain reading of the text will tell you, St. Paul says: "sin ... dwells within me". Not concupiscence or the opportunity to sin (as the Scholastics will say), but sin. Aquinas argues in III. Q. 75, A. 2, that to use a proper noun is to signify it substantially (this is how he 'proves' transubstantiation). If this interpretive principle is applied to Rom. 7:20, this means that (Original) Sin, formally and substantially, dwells in the baptized Christian.

Simple enough, this interpretation, popular enough before Trent, suddenly leads Martin Luther et al, to say that the Christian is simul iust et peccator / at the same time righteous and a sinner.

This utterly undermines the entire system of Purgatory, Indulgences, etc., and St. Peter's still has to be built. Enter the 22 Spanish and Portugeuse bishops who somehow equal an ecumenical/universl Church council, and the Roman Church declares in Trent that: even though the apostle saith sin, the Church has never understood it to be sin proper, but concupiscence (material original sin/opportunity to sin).

So you have Scripture and Tradition in unity on the matter, and the Magisterium saying "wrong".

How is this justified.

First of all, the interpretation of the Bible is made impossible. The Church denies (in a logically circle argument referencing St. Peter's epistle) that Scripture is clear for the laity to understand. Likewise tradition (which had always been public tradition, ie. knowable and written down) suddenly becomes secret unwritten tradition passed on esoterically through the Church. In the end, the only person who can infallibly judge the matter is the Pope.

So Scripture (and less importantly Tradition) are both declared to be fundamentally incomprehensible, and only knowable through the Pope.

This means in practice that it is not the text or Scripture, or the proclaimed message it records, which holds the Truth, but the Papacy. God's revelation is thus only understandable by a secret (gnostic?) special revelation made clear by the Magisterium (presumably Magisterial pronouncements are clear and comprehensible?).

In the end this amounts to saying de facto, that Scripture is not inspired. It also amounts to saying that Tradition is not a valid way of interpretting Scripture either, because this can be confusing, and not all the sources are public or written down, some are secret - knowable and interpretable only by the Pope. In the end, this amounts to something like the inspiration of the Papacy, rather than the inspiration of Scripture, or even a reliance on Scripture interpretted by Tradition.
Posted by A at 7:29 PM