Another Personal Rant: Melanchthon, Confession, and My Damnation

I read these things that Melanchthon said today and I could relate:

"The condition of Church affairs causes me anxiety which nothing can mitigate. Not a single day goes by on which I do not wish that my life was at an end."

"All the waters of the Elbe would not yield me tears sufficient to weep for the miseries caused by the Reformation."

He was not fully a Donatist, he cared about the unity of the Church (obviously not enough, but still). While others said that the Papacy was the Anti-Christ, Melanchthon said he would happily submit to it, if it only taught the doctrine of sola fide / the gospel as he understood it.

I also was re-reading the Joint Declaration on the Doctrine of Justification. There were a few spots where I winced. This one especially to me seemed to be the entire Reformation summed up:

"when individuals voluntarily separate themselves from God, it is not enough to return to observing the commandments, for they must receive pardon and peace in the Sacrament of Reconciliation"

This made me sad. It is this doctrine of Catholicism and Trent more than anything that frustrates me personally (though I understand the Church's defense of the doctrine, and it seems logical and scriptural and patristic enough for me). It is the idea that a person can cry out to God for salvation and not be received by him without the Church. The idea that God cannot save individuals, or rather that these individuals can have no assurance whatsoever of the efficacy of God's grace. Even the medievals said that to those who do what they can, God will not withhold his grace.

But let's make this really practical. Confession wasn't offered tonight (my only time off) and I was planning on going. As I've said before I COULD get up at 5 AM and go to confession at the scary Traditionalist parish. I theoretically could, just like theoretically I could get on a plane to Rome and find a priest there to give me reconciliation. But the reality is that it is not feasible, and that while I intend on confessing, it is not a practical possibility. For the last three weeks I have studied the bible and prayed and cried in repentance. But none of that matters. I am outside of God's grace. There is no assurance I can have. If my plane begins to crash on Thursday I can beg God to forgive me, but I can't know according to Rome.

None of this of course proves it isn't true, none of this removes Rome's claim to authority, etc. I am guilty, I freely admit it.

But there's just something that seems so wrong about it. So utterly unChristian. There is a complete revolting at this idea in my heart. It's the same thing Luther said in the 95 theses. Why doesn't the Pope empty purgatory? Why doesn't the church 'loose' the requirements for penance and declare the whole world saved, or at the very least, repentant Catholics who haven't received the sacrament yet.

This is the reason why I hate being Catholic. If this is Christ, bound in all the canon laws of the church, trapped by all the legal requirements. In the Lutheran confessions, the Eucharist makes the unworthy worthy, it remits sin, because it is Christ, and he loves and died for sinners. In the Roman Catholic confession, Christ is only offered to those who are worthy, those who have jumped through the sacramental hoops, it is a weapon to withhold from the politicians who disagree with the Church, or the remarried. It is a sacrifice where WE offer something to God, rather than receive something from him. It is a work first and foremost, and a blessing only after.

I'm sorry this is a terrible rant.

I really like what Melanchthon wrote before he died:

"Thou shalt be delivered from sins, and be freed from the acrimony and fury of theologians" and "Thou shalt go to the light, see God, look upon his Son, learn those wonderful mysteries which thou hast not been able to understand in this life." 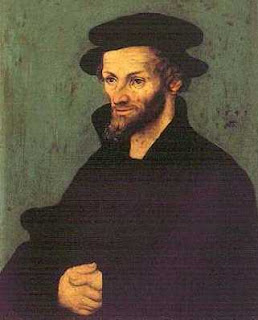 Lord have mercy on this confused Catholic trying not to be swept away on every wind of doctrine, but also to abide in your word.
Posted by A at 6:43 PM