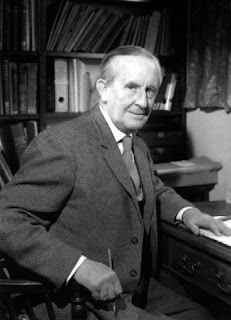 "There cannot be any ‘story’ without a fall – all stories are ultimately about the fall – at least not for human minds as we know them and have them."

"certainly there was an Eden on this very unhappy earth. We all long for it, and we are constantly glimpsing it: our whole nature at its best and least corrupted, its gentlest and most humane, is still soaked with a sense of 'exile'." -J.R.R. Tolkien

I stole the second quote from one of the blogs on my list to the side. But I get from Tolkien 3 main parts of my Catholic understanding of the world.

In the Silmarillion he describes how the Elves went into polytheism and describes the nature of these pseudo-angels or demi-gods and his portrait of the allegorical heavenely hierarchy helped me finally to understand the Catholic heavenly hierarchy without having to resort to claims taught to me by History professors about a mere reflection of the earthly medieval great chain of being.

In Catholicism, because the dogma is that Catholics in a state of grace are in a similar state to the pre-fall Adam and Eve, they talk alot more about human perfection than other Christians do. This is a bad thing and a good thing I've found. But in Tolkien I constantly see his emphasis on the fall as a type of divorce between Heaven and Earth, and the Incarnation as a sort of Marriage of the Human and Divine. This is depicted most clearly with the marriage of the Elves and Men.

Tolkien writes: "The Lord of the Rings is of course a fundamentally religious and Catholic work" , and as I re-read it I see more and more things in there like the symbolic mariological type of Galadriel, etc. But overwhelmingly I find the story to be about hope. I feel a connection to Tolkien because they say he was a pessimist who wrote alot about hope. I have a sort of addiction to hope, and as I'm usually in a state of mortal sin, all my salvation is pinned on most days is hope in God's goodness and mercy. I read today in the LOTR "do not abandon your hope. Tomorrow is unknown". In Catholicism Despair is kind of the supreme sin, and the Lord of the Rings definately stresses that greatly (though I don't know if this is actually helping me avoid the theological vice, but it feels good to read about it).
Posted by A at 9:35 PM